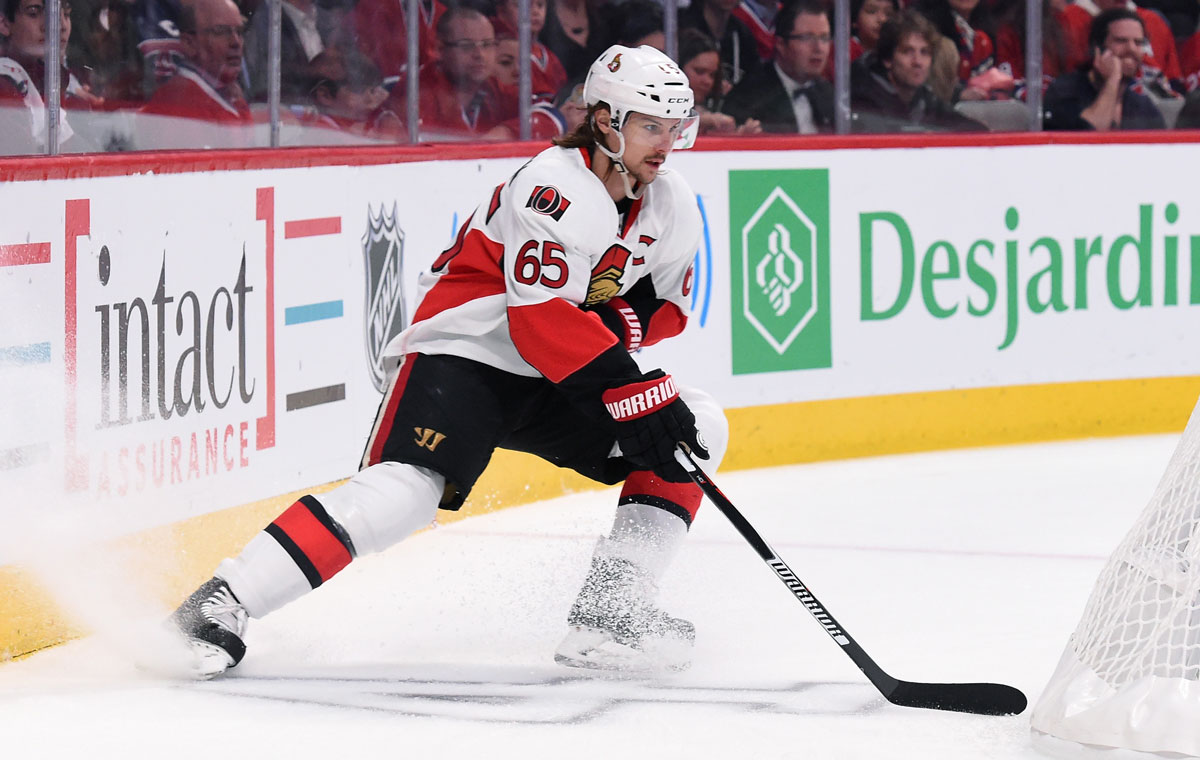 Drew Doughty of the Los Angeles Kings, Erik Karlsson of the Ottawa Senators and P.K. Subban of the Montreal Canadiens are the three finalists for the 2014-15 James Norris Memorial Trophy, which is awarded “to the defense player who demonstrates throughout the season the greatest all-round ability in the position,” the National Hockey League announced today.

Members of the Professional Hockey Writers’ Association submitted ballots for the Norris Trophy at the conclusion of the regular season, with the top three vote-getters designated as finalists. The winner will be announced Wednesday, June 24, during the 2015 NHL Awards from the MGM Grand Garden Arena in Las Vegas.

Following are the finalists for the Norris Trophy, in alphabetical order:

Doughty anchored a Los Angeles defense that finished in the top 10 in the NHL in goals against for the sixth consecutive season. He played in all 82 games for the second time in his career (also 2009-10), pacing the League in total time on ice (2,377:40) and ranking second in average time on ice (28:59). Doughty also posted 7-39—46, his second-best offensive season behind 2009-10 (16-43—59), and led the NHL in a number of enhanced statistics categories, including the team puck possession metric SAT (shot attempts differential) – the Kings registered 410 more shot attempts than they allowed with him on the ice at 5-on-5. Doughty is a Norris Trophy finalist for the second time after finishing third in voting in 2009-10.

Karlsson (21-45—66) led all defensemen in points for the third time in the past four seasons, including a career-high 21 goals (second only to Oliver Ekman-Larsson: 23). He appeared in all 82 games for the second consecutive campaign, ranking third in the NHL in total time on ice (2,234:55) and average time on ice (27:15) to carry the Senators to a 23-4-4 record down the stretch en route to their 15th playoff berth in franchise history. Karlsson also shared first among defensemen in power-play points (30), highlighted by a career-high six power-play goals. He is a Norris Trophy finalist for the second time after capturing the award in 2011-12.

The James Norris Memorial Trophy was presented in 1953 by the four children of the late James Norris in memory of the former owner-president of the Detroit Red Wings.

The three finalists for NHL trophies are being announced by NBCSN in the United States and Sportsnet/TVA in Canada on Stanley Cup Playoff broadcasts through May 5, during pregame programming from 6:30 – 7:00 p.m. ET.

IMG will produce the 2015 NHL Awards, under the direction of executive producer Steve Mayer.

A full lineup of presenters and entertainment as well as information on broadcasting and tickets and hospitality and travel packages through PrimeSport will be announced at a future date. In what has become an annual tradition, EA SPORTS will unveil the Cover Athlete for the upcoming launch of NHL 16. In addition, fans can enter for a chance to win a trip to the 2015 NHL Awards at www.NHL.com/Vegas and tweet about the event using the official hashtag #NHLAwards.