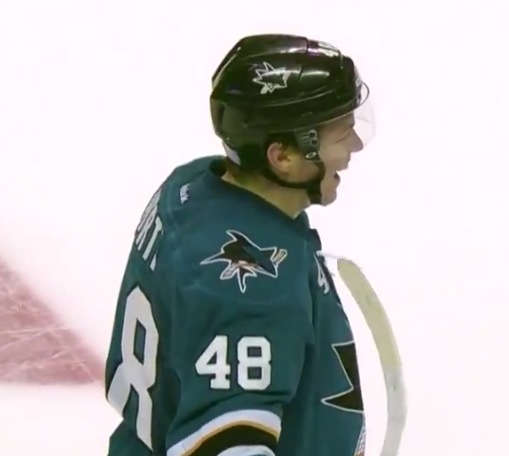 San Jose Sharks winger Tomas Hertl is making headlines all around the NHL after a quick start to his rookie campaign. Hertl leads the NHL in goals (6) and points (7) and drew some attention for his between-the-legs goal, his fourth of the game, in a 9-2 blowout of the New York Rangers.

The responses due to that attention have been a mixed bag so far.
Overall sentiment towards the goal has been positive. Many players around the league have voiced approval of the goal and see it as a positive for the league.

“It’s fun to watch. If I would have been a fan of the game, which I am, I love it,” Vancouver Canucks captain Henrik Sedin said.

These players saw the goal as a display of the kind of skill and excitement that the game needs. The league has made rule changes and a concerted effort to increase goal-scoring and improve the marketability of the sport.

A 19-year-old rookie in just his third game gave a perfect example of why those changes were made.

By all accounts the crowd at SAP Center went berserk after the goal and every replay. People all around the hockey world have talked about it and even ESPN (gasp!) decided to give it some attention.

Not everyone is pleased with the goal and the ensuing celebration however.

Washington Capitals coach, Adam Oates was quoted in the Washington Post telling Hertl not to “disrespect the league,” and that he was “upset” by the incident.

That has since stirred up rebuttals from both Sharks General Manager Doug Wilson and Color Analyst Drew Remenda. Both voiced their displeasure with Oates’ comments in defending the teams 19-year-old rookie.

“I think he should worry about coaching his team, and not worry about being a caretaker of the game,” Wilson told CSNBayArea.com.

It’s easy to see both sides of the argument.

Oates played in a day where that kind of behavior would have gotten someone a swift punch to the face if they even dared to attempt it in the first place.

Wilson and Remenda are defending their own player and see Hertl’s goal as a result of the new age of hockey.

Casual sports fans and even those who pay little attention have taken notice of the play as well. To them it is an exciting play, something that gets people to take notice of the league and skill-level of it’s players.

Hertl barely speaks ten words of English. Yet the most memorable moment came in the post-game when in front of the sellout crowd he described the game as, “a dream,” with both his mother and girlfriend, visiting from Prague, in tears in the crowd.

Those seem like the kind of moments that people in the hockey world would like to be apart and see more of. Those are moments anyone can relate to.

Does Hertl’s goal and celebration get a thumbs up or down?

San Jose Sharks – Tejus covers the San Jose Sharks for Inside Edge Hockey News. I am a longtime Sharks fan who instantly fell for the game of hockey after being introduced to the sport by a friend. I would love to work in the world of hockey in some capacity some day. I play guitar in band and enjoy making movies which stems from my initial experience of cutting Sharks games into personal highlight films.