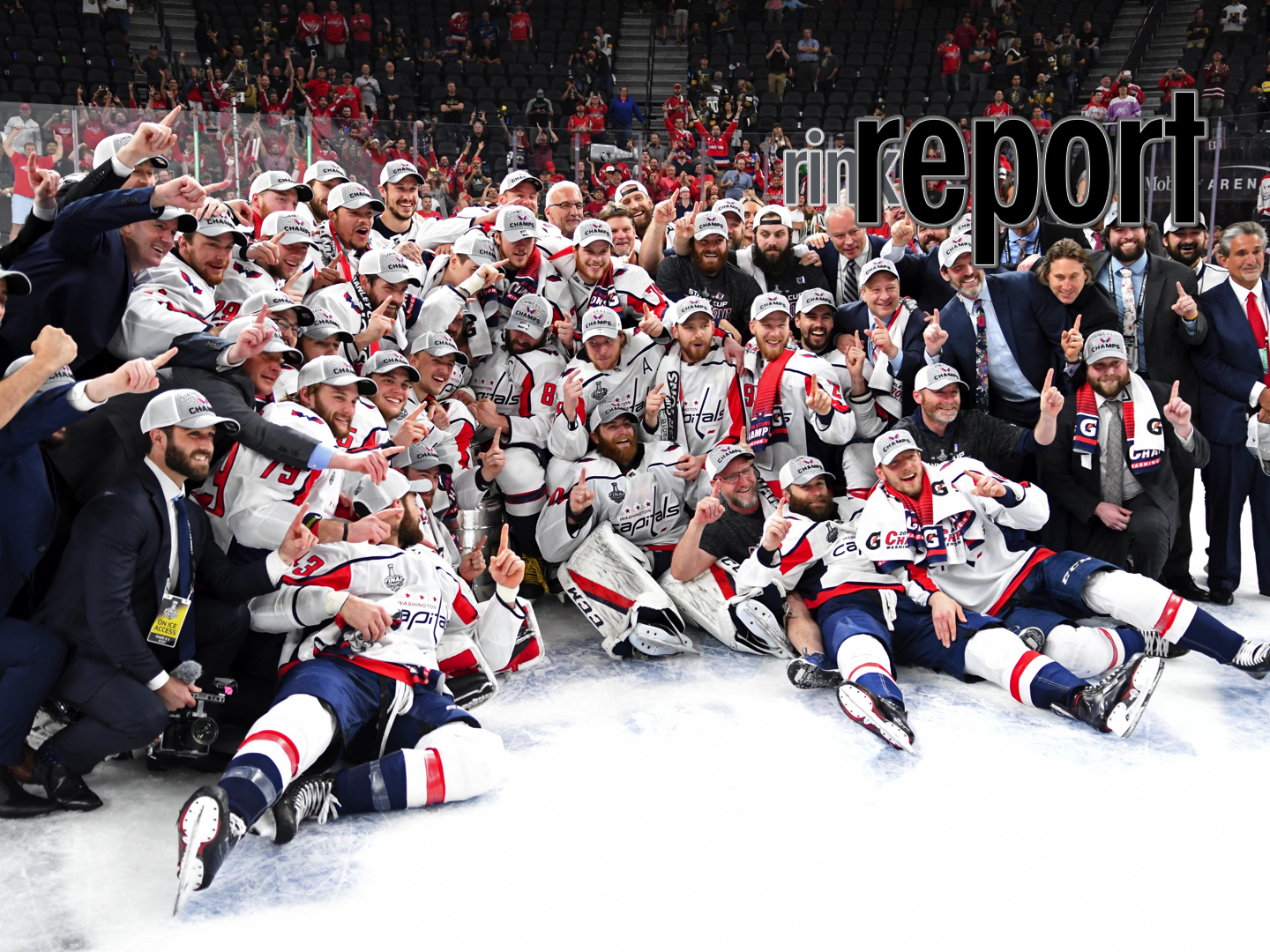 Devante Smith-Pelly and Lars Eller scored 2:31 apart midway through the third period as the Capitals rallied from a 3-2 deficit in the final frame to win the first Stanley Cup in franchise history. The milestone victory came in the franchise’s 43rd season of competition and their 3,701st game (regular-season and playoff) since joining the NHL in 1974-75.

The Capitals ended the second-longest wait for an NHL team before winning its first Stanley Cup. The Los Angeles Kings captured the 2012 Stanley Cup in their 44th campaign. The Capitals’ win also ended a championship drought for fans of metro D.C. pro sports teams, who hadn’t celebrated a championship since Washington’s NFL team won the Super Bowl in 1992.

Smith-Pelly, who posted the game-winner in Game 4, tallied for the third consecutive game — a first in his NHL career. It was his seventh goal of the playoffs (24 GP) after scoring seven times during the regular season (75 GP). Eller, meanwhile, tallied his third game-winner of the postseason, the most among all Capitals players. His first came in double overtime at Columbus in Game 3 of the First Round when Washington trailed the series 2-0; he notched his second in Game 2 of the Eastern Conference Final at Tampa Bay when center Nicklas Backstrom was sidelined by injury. As a result of his heroics, Eller (Rodovre, DEN) will become the first Danish player to have his name inscribed onto the famous trophy.

KINGS OF THE NARRATIVE

Washington’s come-from-behind, Cup-clinching win capped a thrilling roller-coaster playoff ride for the team and its fans. Over the course of the past two months, the Capitals overcame a pair of home overtime losses to start the postseason in the First Round against the Blue Jackets; vanquished the Penguins, who had eliminated Washington in each of their past seven playoff series and in nine of 10 series overall; rallied from a three-game losing streak to defeat the Lightning in the Eastern Conference Final, including a road win in Game 7; and topped former Penguins goaltender Marc-Andre Fleury and the Golden Knights in the Final.

Captain Alex Ovechkin, who led all playoff goal-scorers with 15 and ranked second in points to teammateEvgeny Kuznetsov with 15-12—27 (24 GP), won the Conn Smythe Trophy, awarded to “the most valuable player to his team in the playoffs.” The winner was selected in a vote by a panel of the Professional Hockey Writers Association.

A Moscow native, Ovechkin is the second Russian-born winner of the Conn Smythe Trophy since it was first handed out in 1965, joining Penguins forward Evgeni Malkin (Magnitogorsk) in 2009. The only other Conn Smythe Trophy winners born outside North America are Nicklas Lidstrom (Vasteras, Sweden) in 2002 with the Red Wings and Henrik Zetterberg (Njurunda, Sweden) in 2008 with the Red Wings.

Ovechkin, who has worn the ‘C’ as the team’s leader since 2010, also makes history as the first Russian captain to hoist the Stanley Cup and just the third from outside North America, joining Lidstrom in 2008 andZdeno Chara (Trencin, Slovakia) in 2011 with the Bruins.

Ovechkin capped a milestone season by winning the Stanley Cup in his first trip to the Final. The 2017-18 regular season saw Ovechkin achieve career milestones in goals (600) and games played (1,000). His 13th NHL campaign also saw him reach the 40-goal mark for the ninth time – outdoors at the 2018 Coors Light NHL Stadium Series in Annapolis, Md., on March 3 – en route to capturing his seventh Maurice “Rocket” Richard Trophy.

Ovechkin’s 15 playoff goals led the NHL and set a single-year franchise record. Only one NHL player since 1997 has potted as many goals in a single postseason: Pittsburgh’s Sidney Crosby in 2009 (15) en route to winning the Stanley Cup.

His postseason goal haul included a pair of game-winners. His goal at 18:53 of the third period gave theCapitals a 4-3 win at Pittsburgh in Game 3 and a 2-1 lead in their Second Round series. He also scored the winning goal (at 1:02 of the first period) in Game 7 of the Eastern Conference Final at Tampa Bay. It marked the second-earliest decisive goal in a Game 7, behind only Montreal’s Jean Beliveau (0:14) in the 1965Stanley Cup Final vs. Chicago.

Ovechkin (607-515—1,122 in 1,003 GP) is the third player in NHL history to score 600 career regular-season goals before hoisting his first Stanley Cup. Luc Robitaille won the Cup with the Red Wings in 2002 after compiling 620 goals, while Dave Andreychuk captained the Lightning to a championship in 2004 after scoring 634 times.

In addition, the Capitals became the seventh team in NHL history to win the Stanley Cup despite losing their first two games of the postseason.

Forward Evgeny Kuznetsov led all scorers in the Stanley Cup Final with 1-7—8 and the playoffs overall with 12-20—32 (24 GP), the second-highest point total in a single postseason since 1997. Penguins forwardEvgeni Malkin notched 14-22—36 in his Stanley Cup-winning 2009 campaign.

Kuznetsov (Chelyabinsk, Russia) becomes the third Russian player to lead the NHL in postseason scoring during the League’s modern era (since 1943-44), joining Detroit’s Sergei Fedorov (Pskov, Russia) in 1995 and Evgeni Malkin (Magnitogorsk, Russia) in 2009 and 2017.

Playing in his 100th career playoff game, all with the Capitals, John Carlson (0-1—1) increased his career playoff totals to 18-37—55, surpassing Calle Johansson (12-42—54 in 95 GP) for the most postseason points by a defenseman in Capitals history. Carlson also owns the franchise playoff record for goals by a blueliner (18) and ranks third in assists by a defenseman (37), behind Scott Stevens (44) and Johansson (42).

Carlson, who led NHL blueliners with 15-53—68 during the regular season, also topped all defensemen during the playoffs with 5-15—20 – franchise records for assists and points by a blueliner in a single postseason.

HOLTBY HOLDS THE FORT
Starting the playoffs as the backup goaltender for Games 1 and 2 of the First Round series against Columbus,Braden Holtby won four consecutive starts to eliminate the Blue Jackets and went on to record all 16 wins in the Capitals’ championship drive. Holtby finished with a 16-7 record, 2.16 goals-against average, .922 save percentage and two shutouts.

Many will view his spectacular, lunging save to deny Vegas forward Alex Tuch and preserve a 3-2 Washington lead with two minutes remaining in Game 2 as the turning point in the Stanley Cup Final. After “The Save,” the Capitals closed out Game 2 and captured Games 3 through 5 as well, outscoring Vegas 13-6 in that span.

Every Capitals player captured his first Stanley Cup with the exception of defenseman Brooks Orpik, who notched his second. Orpik was a member of the 2009 champion Penguins alongside Golden Knightsgoaltender Marc-Andre Fleury.

Highlighting his 20 years in the NHL as one of the League’s most successful coaches, Washington’s Barry Trotz is a Stanley Cup champion for the first time. Trotz made his NHL debut as head coach of the expansion Predators in 1998 and was behind the bench for each of their first 15 seasons. Finishing his fourth season with Washington, Trotz ranks fifth on the NHL’s all-time head coaching list in regular-season games (1,524) and wins (762).

The Capitals posted four consecutive wins after dropping Game 1 of the Stanley Cup Final, marking the first time in 16 years that any team had posted a four-game winning streak in the Final. The last club to accomplish the feat was the 2002 Red Wings, who won the series in five games after dropping the opener to the Hurricanes.

For the Golden Knights, it marked the first time they suffered a fourth straight loss in the 102 games (regular season and playoffs) they contested over their magical inaugural season.

TURNING ON THE POWER