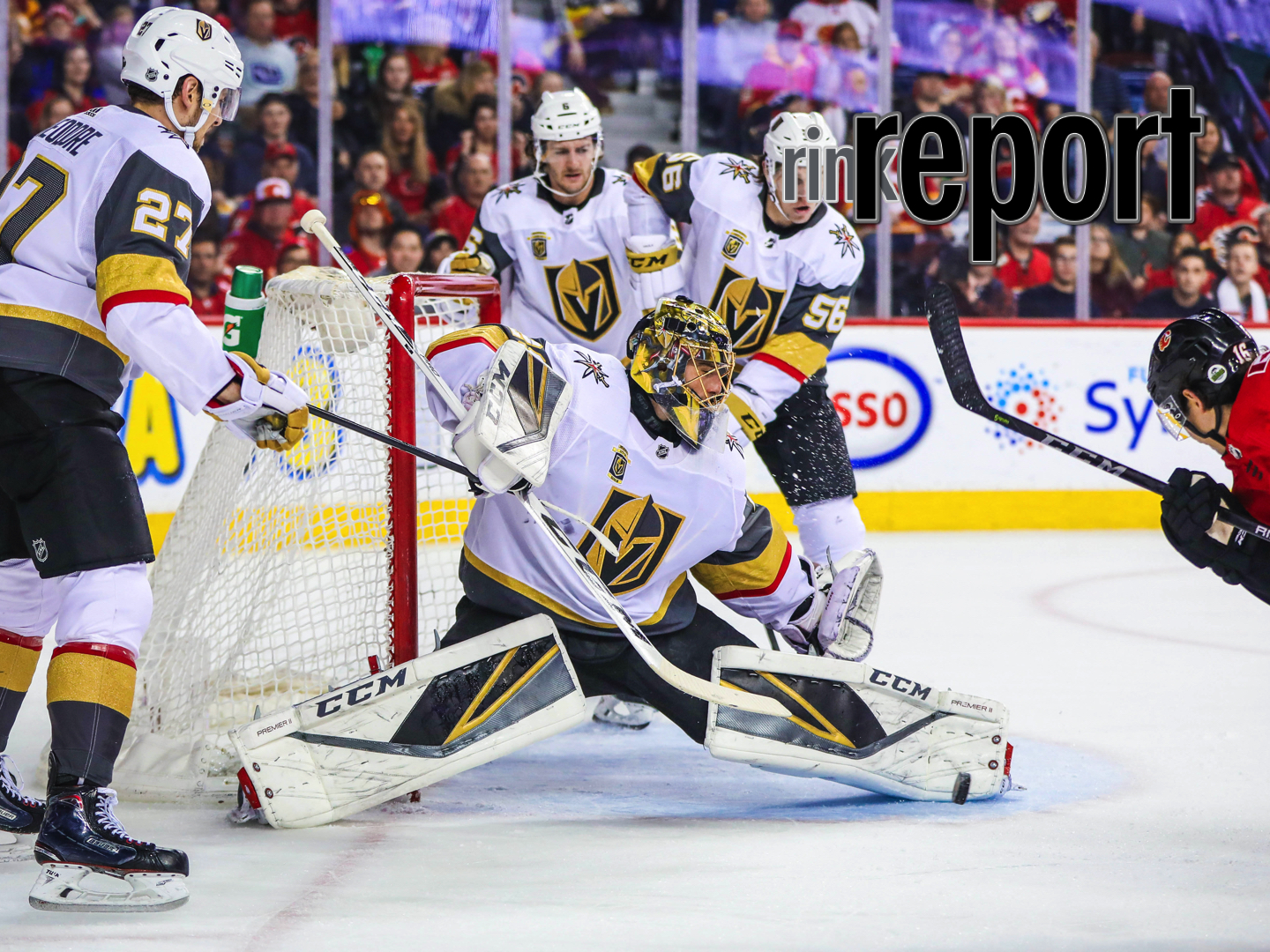 The Golden Knights became the first modern-era expansion team from any of the four North American professional sports leagues to start from scratch and win its division.

Seven teams who were not part of the 2017 Stanley Cup Playoffs qualified in 2017-18 to match the largest year-to-year change in NHL history (for the second straight campaign and third time in four seasons).  For only the fourth time since the conference format was introduced in 1974-75 – and second straight campaign – the last-place team from each conference reached the playoffs the following season, with both the Avalanche and Devils making the leap from 2016-17.

GOLDEN KNIGHTS TAKE SPORTS WORLD BY STORM IN INAUGURAL SEASON
After an 8-1-0 start that featured an emotional home-opening victory to help rally a grieving city, the Golden Knights finished their unprecedented inaugural season with a 51-24-7 record (109 points) and the Pacific Division title. A detailed recap of their memorable season is available here, while some of their most impressive achievements are listed below:

The Golden Knights became the first NHL expansion team since 1968-69 to start from scratch and make the playoffs. The Oilers and Whalers did so in 1979-80 after joining from the World Hockey Association. The Golden Knights became just the third NHL expansion team ever to win its division: the 1926-27 Rangerswon the American Division and 1967-68 Flyers won the all-expansion West Division.

Seven teams who were not part of the 2017 Stanley Cup Playoffs qualified in 2017-18 (COL, LAK, NJD, PHI, TBL, VGK, WPG) – including the expansion Golden Knights – to match the largest year-to-year change in NHL history. This marks the second straight campaign and third time in four seasons that seven new teams will play in the postseason. Overall, there has been playoff turnover of at least five clubs in 11 of the past 13 seasons.  For only the fourth time since the conference format was introduced in 1974-75 – and second straight campaign – the last-place team from each conference reached the playoffs the following season, with both the Avalanche and Devils making the leap from 2016-17. The other instances: Red Wings/Rockies (last in 1976-77), Bruins/Sharks (last in 1996-97) and Maple Leafs/Oilers (last in 2015-16).

The Avalanche (43-30-9, 95 points) clinched a spot in the 2018 Stanley Cup Playoffs after finishing in last place overall in 2016-17 (22-56-4, 48 points). Their 47-point differential matched the fourth-highest year-to-year improvement by any team in NHL history.  The Devils (44-29-9, 97 points) also reached the playoffs after finishing in last place in the Eastern Conference in 2016-17 (28-40-14, 70 points) and winning the Draft Lottery to collect the first overall pick in the 2017 NHL Draft. Their 27-point differential is the highest year-to-year improvement in franchise history.

The Jets (+27), Predators (+23) and Lightning (+19) also made significant leaps in the standings compared to last season:

Eight players scored at least 40 goals in 2017-18, led by Alex Ovechkin (49) who became the second player in NHL history to lead the League in goals seven times. Eric Staal (42) hit the mark for the first time since 2008-09 to join Gordie Howe (11) as the only players in League history to have at least eight seasons between 40-goal campaigns.  Eighty-one hat tricks were scored in 2017-18, including two on each of the first two days of the season and four on the second-to-last day. Only five seasons since 1990-91 have seen more three-goal games.

HUGE IMPROVEMENTS LEAD TO CAREER SEASONS
Twenty-one players boosted their point totals by 25 or more as compared to 2016-17 (min. 50% of team GP), including seven who had improvements of 40+ points. Overall, eight of the top 10 point-getters and seven of the top 11 goal-scorers set career highs.

Golden Knights forward William Karlsson (+53) showed the most dramatic shift, finishing with 43-35—78 (82 GP) after posting 6-19—25 with the Blue Jackets last season (81 GP). His 37-goal improvement matched the third-largest year-to-year boost in NHL history (min. 50% of team GP, excluding shortened seasons).  Avalanche teammates Mikko Rantanen (+46) and Nathan MacKinnon (+44) powered Colorado into the playoffs after a last-place finish in 2016-17. They were one of two sets of teammates to each have year-to-year improvements of 40+ points. There is only one other example from the past 24 years of teammates from multiple clubs each finishing with 40+ increases in points: 2003-04 to 2005-06 (ANA, DET, EDM, NYR and SJS).

The Flyers’ duo of Claude Giroux (+44) and Sean Couturier (+42) also finished with boosts of 40+ points. Giroux became the third different Flyers player to finish among the top two in NHL scoring (Bobby Clarke 2x and Eric Lindros) and the third to at least share the League lead in assists, joining Clarke (1974-75 and 1975-76) and Mark Recchi (1999-00).

McDAVID, OVECHKIN ADD TO AWARDS COLLECTION
Oilers captain Connor McDavid (41-57—108) became the second player in NHL history to lead the League in scoring multiple times before age 22, joining Wayne Gretzky who did so three times. McDavid had 38 more points than his next-closest teammate and factored on 47% of Oilers goals (108 of 229 in regulation/overtime) – the highest such percentage since 2007-08 (Alex Ovechkin: 47% w/ WSH). Mario Lemieux set the NHL record of 57% with the Penguins in 1988-89 (199 of 347).

Capitals captain Alex Ovechkin became the fourth-fastest player to hit the 600-goal milestone in March and scored twice in his final game of the season to hit 49 goals and capture his seventh Maurice “Rocket” Richard Trophy. Ovechkin matched Bobby Hull for the most seasons as the NHL goals leader. At 32 years, 203 days, Ovechkin also became the oldest player to win the NHL’s goal-scoring title since Phil Esposito in 1974-75 (33 years, 45 days w/ BOS).

The Lightning duo of Nikita Kucherov (39-61—100) and Steven Stamkos (27-59—86) finished third and 12th in League scoring, respectively, aided by simultaneous season-opening point streaks of 11 games (just the seventh such instance in NHL history).  The Penguins became the first team since the 2003-04 Lightning to have three players finish among the top 10 in League scoring (Evgeni Malkin, Phil Kessel and Sidney Crosby). It marked the sixth time the Penguinshave achieved the feat – the most of any franchise in the expansion era.  Tampa Bay’s Andrei Vasilevskiy (44-17-3), Winnipeg’s Connor Hellebuyck (44-11-9) and Toronto’s Frederik Andersen (38-21-5) each established franchise records for wins in a season, while Nashville’s Pekka Rinne (42-13-4) posted the third 40-win season in club history (all by him).  Vasilevskiy became the 12th different goaltender in NHL history to finish a season with at least a share of the League lead in wins before celebrating his 24th birthday – Carey Price (2010-11) is the only other goaltender to do so since 1996-97. Hellebuyck, meanwhile, matched the NHL record for home wins in a season (30).

Barzal joined Hall of Famers Bryan Trottier and Mike Bossy as the only Islanders to record 80+ points as a rookie and became the fifth rookie since 1995-96 to average at least a point per game (1.04). His 63 assists were the third-most ever by a rookie in NHL history (tied).  Connor became the second Jets rookie in as many seasons to reach 30 goals, marking the eighth time in NHL history that a team featured at least one 30-goal rookie in consecutive campaigns.